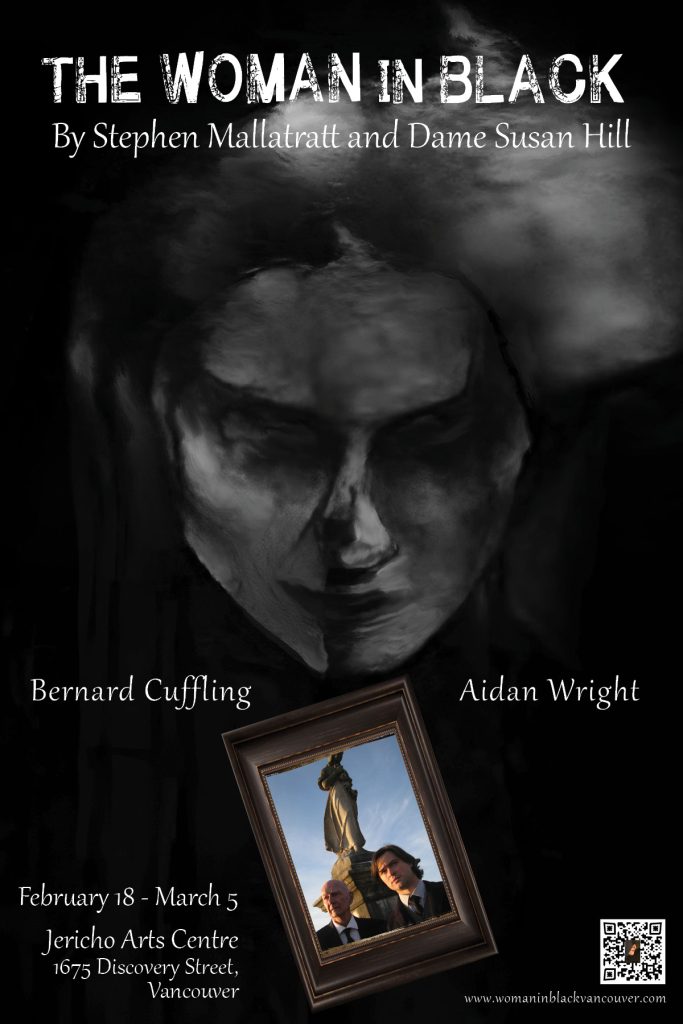 THE WOMAN IN BLACK by Stephen Mallatratt and Dame Susan Hill

THE WOMAN IN BLACK is proudly presented by CLASSical ACT Collective – with the generous support of Famous Artists Limited – by special licensing arrangement with The Agency (London) Ltd.

The most chilling night that you can have in a theatre!

London’s second longest running play, THE WOMAN IN BLACK, comes to the Jericho Arts Centre in Vancouver for a limited engagement beginning February 18, 2023.
With Vancouver favourite Bernard Cuffling directing and starring, THE WOMAN IN BLACK is more than just a play, it’s an experience…and one that attendees won’t soon forget. When aging solicitor Arthur Kipps (Bernard Cuffling) engages a young actor (Aidan Wright) to bring his eerie experiences at Eel Marsh House to life, neither he nor his dramatic collaborator expect the haunting to move into the theatre and curse them both. As ghostly sounds swirl, the audience will struggle to trust their eyes as this show conjures the very essence of “The Woman” herself.  THE WOMAN IN BLACK is a theatre-goer’s favourite all over the world. More than 10 million people have seen this haunting masterpiece in the West End of London alone. Based on the novel by Dame Susan Hill, and developed first for the pub, then for the stage, by Stephen Mallatratt, THE WOMAN IN BLACK has also seen life as a movie with Daniel Radcliffe and has returned to New York City for up close and personal presentations at the McKittrick Hotel. With the original production closing in London this year, the Vancouver presentation by CLASSical ACT Collective – with the generous support of Famous Artists Limited – will be the only production on Earth for audiences to enjoy!
The shadowy figure of “The Woman in Black” can be seen around town in the lead up to this staging. Her appearances will be fleeting, but for those who are lucky, she will be found on neighbourhood streets, in the woods, on the beach, and even within a cemetery. Those who dare to gaze upon her can enter an online contest for free tickets. If you miss her appearances around town, fear not…she will make her presence known at the gripping, edge-of-your-seat production.